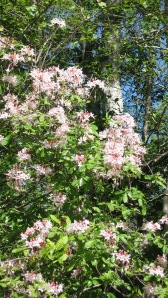 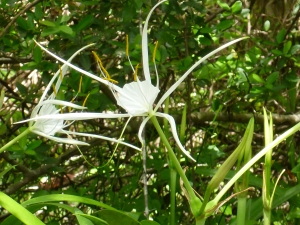 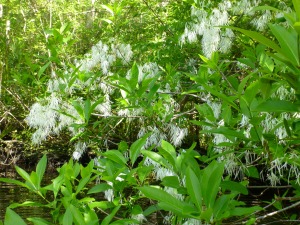 I was born and raised in Hawaii.

For the first ten years of my life, my after-school and weekend hours were spent in the lush gulches of the Hamakua coast of the Big Island of Hawaii.  There were wild areas to explore and enough food for lunch so I didn’t have to return home till later in the day — guavas, strawberry guavas, mangos, rosy and mountain apples.   There were streams with pipipi’s, little shelled creatures which my grandmother boiled in salt water and which required a sewing needle to pry out the edible meat.  Along the waterway formed by a concrete flume along the side of the mountain on the narrow path to Akaka Falls there were hundreds of tiny fresh-water shrimp  which grandma stir-fried with soy sauce and a touch of sugar.   You ate the whole crunchy shrimp — delicious!!!  If that wasn’t enough, gifts of the forests to bring home were tree fungus, bamboo shoots and bracken.   These provided me an extra excuse for not returning home on time.

I learned to swim in one of those gulches — Kolekole Gulch — with a waterfall on one side of the gulch, the valley to the left and the Pacific ocean to the right under a high railroad trestle.  My goal as a youngster was to swim well enough to make it to the waterfall and back, which I eventually accomplished.

Living in Florida since 1973, raising kids, vegetables, chickens, ducks, rabbits and geese, and starting a business, I never ever had a sense of place like I did when I was a kid.

In March, 2011, my husband and I decided to explore Tate’s Hell’s paddling opportunities.   We had stopped a few times at the Womack Creek campground before and had eaten our picnic lunch under the covered pavilion, but never stayed longer than that.   This time, we decided to bring our kayaks and paddle what seemed to be a branch of the Ocklocknee River.   Paddling upstream on the Ochlocknee, we kept to the left side (river right) until we entered what looked like Womack creek on the map.

Approaching the creek, the delicate scent of flowers permeated the air — was I dreaming?  This is the way the air in Hawaii smells — flowers in the air.   And soon it was apparent that on the right side of the creek stands of wild azaleas were blooming.  Also blooming as we paddled upstream were fringe trees, cross vines with their orange trumpet flowers, blackberries, dahoon hollies — the whole creek was in bloom!  For the first time since making Florida my residence did I feel that Florida was my home.  It brought back memories of that wonderful, wild childhood, the sights and smells of a wild forest, only the sounds of birds and our paddle strokes, and a spring atmosphere which embraced us.   The word ephiphany describes it:   for nearly 40 years I had no sense of place, and I had found it.   This is the Florida I call home, this is the Florida I treasure and want to protect.

We visit Womack Creek to paddle often.  We and another paddler, Steven Babcock, created a blog site for our master naturalist class called “A Paddler’s Guide to the Blooming Plants of Womack Creek” (http://www.womackcreek.wordpress.com)  Womack Creek is never the same.  We first saw it after years of drought.  The following year the rain brought a different blooming pattern, and this year, another.  More branches of the creek are opening up.   One day we hope to be able to paddle to Hwy 67 and see the beaver lodge which we’ve been told is in Womack swamp.   There are so many wild places in Tate’s Hell to explore and discover, just like when I was a child following the forager’s trail or the sound of the stream.