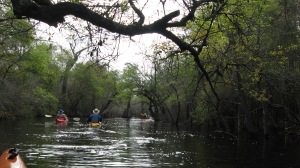 March 11-12, 2012 — a group of paddlers put-in at FH 22 east of Sumatra to do a 2 day paddle on the New. One portage, swift water flowing between tightly growing cypress, but generally an easy paddle. Paddling the New River in this stretch to camp site 7, is always different.

The New River starts in the Mud Swamp Federal Wilderness northeast of Sumatra and travels approximately 21 miles southwest through the entire length of Tate’s Hell to join the Crooked River and there forms the Carrabelle River, north of US 98.  It begins as a narrow stream, some of which disappears underground when the area has not had sufficient rainfall, but usually has sufficient water in the Spring to paddle from the Sumatra put in to its mouth.  Even in semi-drought conditions (which we experienced in 2009-2011) the river has sufficient water and unobstructed paddling conditions from Camp Site 7 to the Carrabelle River, a trip of approximately 12 miles.

Limbos are to be expected on this stretch of the river. So, this one? No big deal.

There are 14 primitive camp sites along the river, all but four of which are within spitting distance of the river.  A few may be underwater during periods of excessive rainfall.   Each of these sites has a fire pit and a picnic table and most of them can accommodate 2-to-4 tents, with a couple of sites that can handle 10-15 small tents.  There is no potable water at any of the sites and, with the exception of Gully Branch, there are no bathroom facilities at the sites.  The protocol for campers and day users is “pack it in, pack it out”.  The Gully Branch site, which is the location of the only bridge across the river, has a vault toilet and a large pavilion for groups.  The Tate’s Hell Forest Service does a superb job of maintaining the sites, and, for the most part, campers show respect for the natural world and rarely leave a mess.   Sites must be reserved through Tate’s Hell Forestry’s office in Carrabelle for $10 per site per night.  With the exception of hunting season, it is usually possible to reserve a site with short notice.

Aside from the single portage, this was the most exerting activity of the day.

This river, only one of several in Tate’s Hell, is a paddler’s paradise — challenging and beautiful, but it is equally terrific for fishing, camping, hunting, and most important, for experiencing our natural world.   The camp sites are great places for families (no non-natural noise, no distorting lights) and especially good for introducing children to the wonders of nature and discovering how all of life is connected. 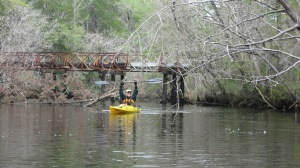 Under the Gully Branch Road bridge and more than halfway to the take-out.

Pope’s Place — take-out early enough to have a big meal at the Fisherman’s Wife in Carrabelle.