These photos were taken on a paddling trip on November 19, 2013. 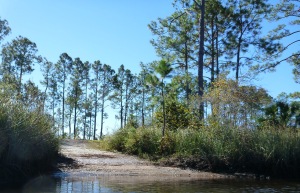 An alternate put-in, right off shoulder of Hway 65, will save you 7.0 miles, about 3.5 miles from Whiskey George Put-in above. Off shoulder parking only. 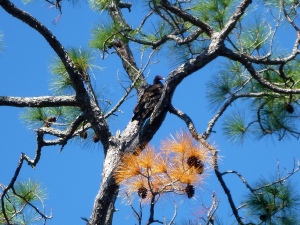 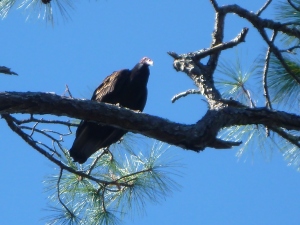 Stepping down to a lower branch, for a better look.

Maybe, if I act like an anhinga, they’ll paddle away and leave me alone.

And ends here. Only to reappear further upstream. We don’t hike with our kayaks, so we’ll wait when there is more water to the upper stretches. 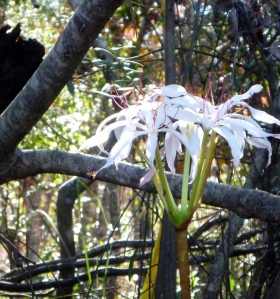 The clouds were spectacular.

A fly fisherman enjoying his day off, down river. 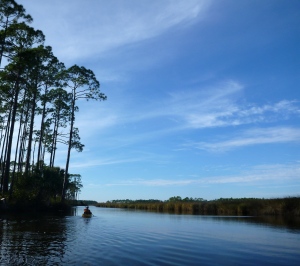 Homeward bound to the Whiskey George Launch Ramp — 13. 7 miles of paddling (including every oxbow along the way). If you put-in right at Hway 65 just south of this launch area, you’ll cut your paddling miles by 7 milesw

We saw a fisherman catch a 20-22 inch redfish and return it back into the water, ospreys, flocks of crows, kingfishers, a huge alligator which we surprised, a protothonary warbler, several other unidentified birds.   There is a primitive camp site on this creek in Tate’s Hell, accessible by a mucky bank. There is another called Whiskey George campsite, at Forestry roads 10 and 25.   This creek is tidally influenced — we paddled upstream against the tide and returned, also, against the tide.   It was not a difficult paddle.

It seems from the GRASI maps, that there are military crossings planned in two places on the upper sections of this creek by vehicles weighing up to 2.5 tons,  near the Whiskey George campsite.  Whiskey George empties into East Bay and then into Apalachicola Bay.  East Bay’s estuary is a very important nursery for Apalachicola Bay.