We’ve always wanted to camp here, a cosy (but large site) right on the Crooked River, far away from the main traffic of the forest roads, yet less than 2 miles from the Womack Creek Campground if one wanted to get a hot shower.

We had paddled over 10 miles on Womack Creek, doing our weekly spring observation field work.  There were two sites at the Womack Creek campground filled — we were glad to see that people are finding out what a lovely place it is to camp.   But we had reserved this site (850-697-3734 – Carrabelle Tate’s Hell Forestry) — it is one of the most popular sites in Tate’s Hell — and we had it for one night.

It was predicted to get to the low 40’s, something which we could tolerate in our  40 degree stated, actual 50 degree, sleeping bags, but we brought along our 20 degree bag, just in case to use as a quilt — a luxury when car camping, not possible when kayak/camping.  We were hoping to do a 15 mile paddle the next day with headwinds expected on the paddle back.  We needed to get a good night’s rest.

We had brought along some of the heavy pine wood which a previous camper at Womack Creek had given us — we had used our scroungy pine logs and saved his.  We found out that it was heavy because it was green, and it took some coaxing and adding of pine cones, leaves & pine needles and dead branches to get the fire going.  Fortunately we had an ax with us and we split the logs so it would burn better.   In two hours we had a nice fire going, but we saved enough logs to have for the morning fire — 40 degrees can be cold right out of a warm sack.

Twilight at camp is always a nice time and coming in earlier to set up camp so one can relax at that time is one of the pleasures of being outdoors.  Facing the river, enjoying our hot drinks around the fire, one of us surveyed the trees across the river, enjoying the spring colors.  The other, fortunately was looking at the river.  A curious otter, fat and larger than any he had seen, popped his/her head out, didn’t like what he/she saw and gracefully dove under water.  The only part of the otter the tree-viewer saw was its back and glistening tail.

The wind brought chill, but the fire, once it got going, was sufficient to keep us there until 10.  These campfire sessions for two, when all good talk is exhausted, led us to start reading Shakespeare, which plays were but faint memories.  We did Julius Caesar last March at St. George Island Campsite, Romeo and Juliet in February, can’t remember which campground, we got bogged down on King Lear — probably not a good play for campfire reading — and Macbeth on October 31 at Florida State Caverns campground.  Hamlet was in the pouches of one of our car seats, ready for reading.

But it was a perfect night for taking in the whole of the place, a crescent moon just over the trees in the south, then a single star and then more as the night progressed.  No one was around, no boats on the river, no cars on the road, no sounds except the crackling of the fire.

Everything which would have been attractive to critters was put in the car for the night — the thin sliver of a moon leaving behind a starry sky for us to sleep under.

The day broke over the river — what do they say about red sky in the morning?

And the camp was slowly stirring. 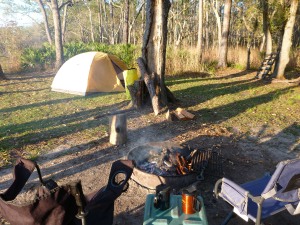 But a good fire got us started.

But after the morning fire burned down, we set off for the  day’s paddle to a low incoming tide.