The day was overcast, the temperature at put-in was 82 F, but there was a slight and welcomed breeze.   It felt more like an early summer than late spring day.

In a little branch off the Ochlockonee before entering Womack Creek, a troupe of Cowcreek Spider lilies — the first of many to present themselves on the creek. 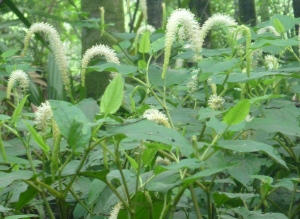 Nearby, in the same branch, more Lizard’s tails than we have ever since in one spot.  This is the way it is with the creek — a profusion of one species one year, scarcity the next.  Every trip is a surprise and every year is a different scene. 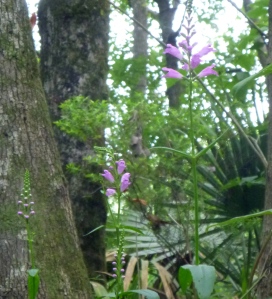 Not too far away, and pretty early, false dragonheads.  In the main part of the creek in late May and June masses of these blooms were seen last year. 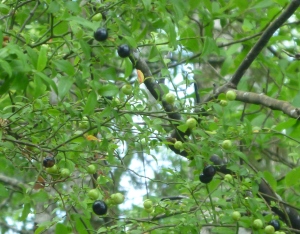 Before I left the branch, I could not resist these blueberries — tart with a slight tinge of sweet.  There is nothing like wild blueberries — hybrids cannot compare.

Last year cross vines bloomed from spring to the killing frost in the winter.  The year before they were hard to find.  They may not bloom in abundance this year.

In 2012 the creek was festooned in clematis crispa.  Last year we saw only a few.  This year the vines are thick, but the buds do not seem to have appeared yet on these vines.  We cherish the few flowers we see. 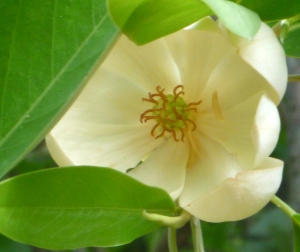 Sweet bays are always blooming; in some years in greater profusion.  Their fragrance, thick and heavy, lead you to the blooms. 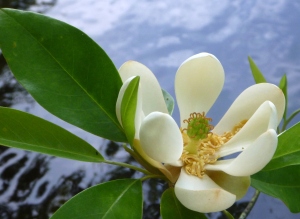 I inadvertently broke this spider’s web while holding on to a branch to get a steady shot.   More often than not, it’s harmless water snakes I encounter while taking photos.

There are three native hollies on Womack Creek:  Yaupon, which blooms first, American and Dahoon which bloom about the same time.  They provide fruit for the migratory birds in the fall.  The dahoon hollies will be in full bloom next week.  Along with the swamp titi, Arrowwood, muscadine grapes and poison ivy.

This inch worm fell on my thigh.  I relocated it to a better surface to photograph.  Wondered what type of flying insect it would develop into and where it came from. 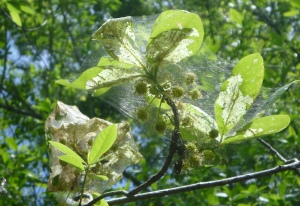 Got my answer just a few paddles upstream.  On the Ogeche tupelos tent worms.

The last of this springs pinxter azaleas — this was a glorious year for pinxters. 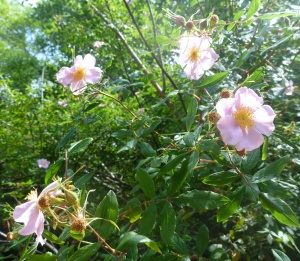 Another flower which leads you to them by scent — swamp rose, not in such profusion as 2012.

Ferns, a harbinger of summer, at Nick’s Road Primitive Camp Site, our usual lunch stop, 3.8 miles from put-in at the Womack Campground landing.

The geometry of natural forms — hard to come up with a better design.

This less than 1/2 inch grasshopper will grow 5 times and consume many times its weight in tender plant leaves.

Every trip, we check the green fly orchid plants, a threatened species.   We have never seen the blossoms of this epiphyte, the only tree orchid in North Florida.  Today we were rewarded when two tiny plants showed these bloom stems — even seeing these buds was a thrill.   If you wish to know where they are located e-mail quincypair@comcast.net — we will give you the coordinates.  We have been advised not to post the coordinates on a public forum because plant hunters will harvest them.

No snakes, today, but we saw a hawk, heard what we believe to be a pileated wood pecker, cardinals and barred owl.   We also saw a mother duck with 6 ducklings and a great blue heron — probably feasting on the frogs we heard while paddling upstream.   Turtles are always sunning on this creek and the few alligators are skittish, diving into the water with a great splash when they hear us coming.   Dragonflies, no butterflies, but mosquitoes and yellow flies at the Womack Creek Campground landing (not at Nick’s Road primitive camp site), lots of bees on the Ogeche tupelos.  The old frames in the bee hives on Rock Landing Road have been replaced to store the tupelo nectar which bees transform into honey.

As for the sound:  1 small plane, a light drone; one motor boat on the Ocklockonee and a pontoon boat on the Ochlockonee going at minimum speed.    Except for these, the whole paddle was without reminder of human mechanized invention.

On Sunday, Mother’s Day, we spent the day with Mother Nature.