The day was glorious, though cool, wind from the north with some chop on the Ocklockonee, but once within Womack Creek, the water calmed. 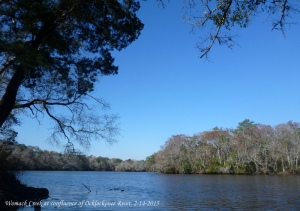 We were looking forward to seeing more buds on Womack Creek.  But it is mid-February — it was a hope. 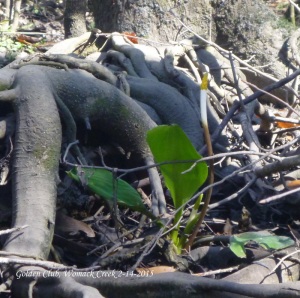 At the first cove on RR, a single golden club plant with one bloom stalk and two others still nestled in its leaves. 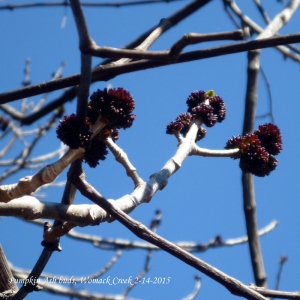 And in the first mile upstream, in a secluded, but sunny spot pinxter azaleas were blooming.  The first of the season and an early bell weather.  The other pinxster buds are still tightly closed, waiting for more consistent spring weather.   This was a Valentine’s Day gift!

Not to take these little blossoms for granted, they were already in bud when we last paddled Womack Creek.  Now throughout the whole creek and all of its branches, the Walter’s Viburnum blooms are opening up.   The earliest of spring flowers in the North Florida wetlands. 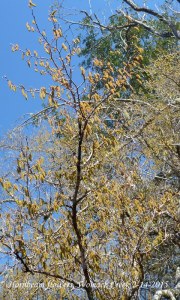 And the hornbeam trees were full of blossoms. 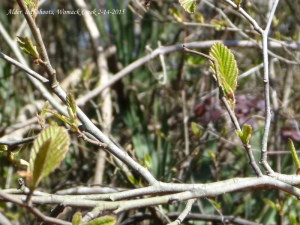 Alders putting out their leaves.   As the regular rain cycle has resumed, these alders have taken over many areas previously taken by False Indigo and Azaleas.

And sweetgum leaves will be bursting out soon.

And bald cypresses are now in flower.

The Florida red maples are starting to develop seeds.   On Womack creek it seems many of the maples are either male or female trees, although maple trees can have both male and female flowers on a single tree.

And the deadly water hemlock starting with new growth. 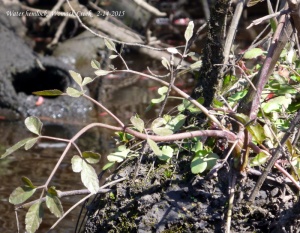 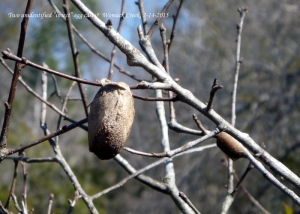 Insect cases, one case already emptied, the other still incubating.

We decided to explore all the branches of Womack creek.  About 2.5 miles from put-in on RL is a branch as wide as the main channel which flows past Nick’s Road Primitive Campsite.  We took this branch first — we had not been on it for a year. It narrowed after about 1 mile and ended as do all these branches into a tangle of mud, branches, trunks — an impenetrable and not navigable dead end.

Exploration in the branches of rivers in north Florida requires saw and clipper.   Downed trees  block further clear navigation, forcing a portage in muck, branches either overhanging or dead can be cut through, strainers (collections of branches in the water like a dam) can be loosened and opened up.  Some trees do not fall directly into the water and allow, depending on water level, for limbo paddling — one gets pretty good at what we call the “turtle scrunch” — receding into one’s cockpit with as much of one’s body and head close to the height of the deck to get under low trunks.   In slow moving waters this is easy; in fast moving waters failure to coordinate and place one’s kayak properly can result in a capsize.

With limbo logs, one has to note,  where the creek or river is tidally influenced, whether one is going upstream in high or low tide.  If one barely makes it under a log on an outgoing tide,  on return in an incoming tide plan B will need to be pursued.   We learned this on Trout Creek, a small tributary of the New River, which drains from the Dwarf Cypress swamp.  We were on one of our exploration trips which required, as usual, cutting through a path up river and found ourselves in an incoming tide on the way back.  The space was barely enough for the kayaks, sans paddlers.

And beyond that, more obstacles. 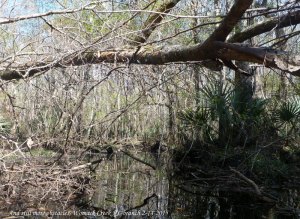 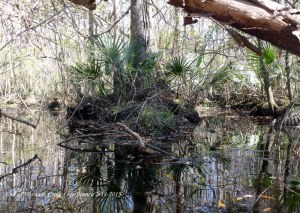 From put-in to Nick’s Road Primitive Camp Site which is a sunny spot with a picnic table, a fire ring and a grill, is 3.75 miles.  This is a good place to have lunch.

But upstream, there are two branches, each of which have increased in navigability in the last 3 years which were wetter than the previous 4-5 years.  We were able to get up to the furtherest point we have ever paddle on the branch on RL (about 1.2 miles) and got much further up the second branch on RR than we have ever been before.

These creek  branches were equally as challenging as the first branch, but we were amply rewarded:   an otter, a white tail deer, a pair of barred owls, a hawk in this section.   And we were 1.2 miles from hway 67, where Womack Creek crosses to the northwest before we had to stop. This is the closest we have ever been to hway 67 on the creek.

Here are the photos:

One has to be willing to hope for the best.

But it wouldn’t hurt to test the depth of the water occasionally.

A sharp saw a necessity when one decided to explore small branches. 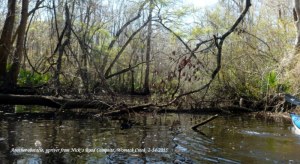 There’s always that last barrier one is willing to cross.

Nothing convinces more than a series of obstacles in close proximity that its time to turn around and go downriver to take-out.

Today’s paddle was 11 miles.  Our normal paddles on Womack Creek runs from 7.5-8.5 miles, upstream and downstream.

We put in at a temperature of 56 F and took out at 60 F.  The winds had picked up, the tide had turned, and we were ravenous.

The sky remained cloudless, the air crisp — in the protected waters of Womack Creek the 10-12 mph winds were not felt.  A bit of chop leaving Womack into the Ocklockonee, but it was a short paddle to the take-out.

What did you do on St. Valentine’s Day?