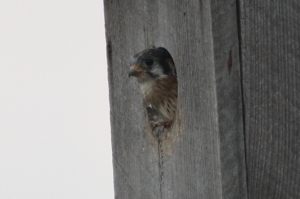 Submitted by Peggy Baker of Francis Weston Audubon Society of Pensacola, the society which completed a 2 year study recently of the birds in Blackwater River State Forest (abbreviated report by Peggy Baker posted in this blog, 2013).   The photo of the nestling was taken by Larry R. Goodman.

“Here is a picture of the southeastern subspecies of the American kestrel.

“This bird nested all over the SE US at one time.  In the last 80 years it has lost 70% of its population.  Most of these birds nest in the middle of the state.

“This bird was photographed and thus documented in Blackwater by our survey team after FWC put up nestboxes in an area where we saw pair feeding young.  Now there are numerous pairs in these FWC boxes.   We cannot find another record of these birds nesting in Blackwater.  So with the return of the Longleaf/wiregrass habitat, this bird has expanded it range.  Larry Goodman is our our photographer.”

Comment:  GRASI  EIS notes that the open areas of the forest would be advantageous for positioning of temporary camps.   These are the areas in which the birds would be found.  Although the report by the society was available at the time of the initial EIS, no mention of this report is found in the species to be impacted.