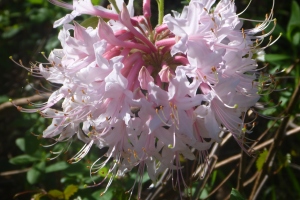 St. Patrick’s day, at 11:30 pm. It was perfect paddling weather — in the low 70’s.  There was a slight breeze which rippled the surface of the Ocklockonee River, but  the trees, even with the early leaves,  protected Womack Creek.   The colors were spring — shades of light green, tinges of red with a few red maples still asserting its shiny red colors — a continuum of hue.  The bays with their darker, mature leaves added a depth to the colors of the scene.

The woodpeckers were pecking, the ubiquitous kingfisher darted upstream and then down, the resident hawk could be heard and was seen, a great blue,  which now seems a regular in that creek, and both barred owls’ dueling duets and great horned owl sounds at dusk and in the early morning.

Walters viburnum is still in full bloom, but will not be so within a week of 70 degree weather, but the swamp dogwoods will be blooming soon and swamp sweetbells soon after.  The blackberries are now in bloom and are the parsley haws.   Ogeche tupelos are just beginning to start their leaf buds.

The swamp is alive with the sound and activity of life — carpenter bees and honey bees sipping nectar from the pinxter azaleas, nymphs hatching out, dragonflies and both the swallowtail butterflies flitting from flower to flower.

Young alligators — the creek may be a nursery — are never cautious.  One cruised along my kayak, unafraid.  And a young brown water snake, less than a yard long, was out sunning, totally camouflaged against the brown/black branch.   And even young cooters, some no larger than 5 inches,  were perched on logs.

We camped there overnight to save a trip the next day to Eastpoint’s Apalachicola National Estuarine Research Reserve where we were looking forward to a talk on Florida’s freshwater turtles.

Two years ago, on this same week (Spring Break for Leon County Schools), we had met a father and his two sons and their guests here.   We did not camp last year during the spring break (we had taken two mothers and their four children to camp at Nick’s Road Primitive Camp site, which was reported on in an earlier blog).   We did not recognize the older son, he is now a freshman at Leon High School, but he nudged our memory.

This dad has taken his sons to camp and boat and canoe, fishing and hiking and just enjoying the Panhandle’s out of doors from the time they were very young.

The young man related to me that he went camping with some friends overnight and he brought along a Coleman stove, water and some food.  His friends made fun of him with all the gear he had, but they helped tote all that gear 2 miles to the camp site.   In the morning, he got up, and had prepared for them when they got up coffee and spam and other goodies!  Were they happy that he had some camping skills and to know that water and food are essential and he knew how to cook the food.

Mack, a host to end all hosts, had at our campfire a load of firewood and fatwood to start the fire.  The bathrooms were immaculate and freshly painted!   The picnic table was pressured washed clean and the fire pit was clean and ready to start.

The day before a couple from Alaska had camped.  There seem to be more out of town campers than in state.  What a shame — for a north Florida experience without being packed between RV’s and trailers, this is one of our favorite places.

The day we broke camp, Paddle Florida, which we had joined last February to paddle 5 days on the Withlacoochee, arrived with 40 paddlers.  Unlike last year, when every day but one was a rain day, and that brought a blustery winds which make doing Ochlockonee Bay treacherous, this year’s group will have perfect paddling weather.

We checked the New River — it is very low.  We were hoping to camp at Campsite 7 next week and paddle upstream, but it does not look promising.   When it is low there are too many big trees which have fallen over the river to paddle.  When the river is high, one merely paddles over them.   A federal forester, now retired, told us that when the deciduous trees start leafing on the New River, they guzzle up water like marathoners and paddling will require portaging and dragging.

The next day we paddled from the Womack Creek Campground on the Ochlockonee to Crooked River, all bounded by Tate’s Hell land on one side, to Loop Landing campground.  This, too, is another isolated campground which we like to camp — right on the Crooked River.  It’s a 4 mile paddle.  We started out at 8:35 a.m. and never have we paddled the Ochlockonee when it was so calm.  Pinxters are blooming there also as are Devil wood with its white blossoms and blackberries.

We paddled to McIntyre landing on the Ocklockonee which is at one end of the Crooked River.  The posts which once supported a train track on which trains hauled turpentine from one side of the river to the other are still there.   Crooked River connects to the New on the west and is subject to tidal flow from both the Carrabelle River and the Ocklockonee River.  We were against the tide that early in the morning, but it was a short paddle and the sky was blue, the air sweet and crisp  and spring in the air.

We had parked our car and trailer at Loop Landing, which is only 2 miles from Womack Creek Campground — one could walk to get one’s car if one is camped at Womack.

Go paddle Womack now and throughout April — the creek is blooming and there will be a succession of blooms from now on. 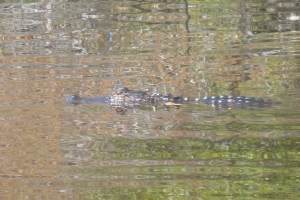 The splash from a little turtle’s jump. 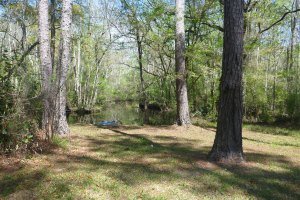 Nick’s Road landing — always a great place for lunch on Womack Creek.  Picnic bench, grill and fire pit.   Also a great place to camp — away from it all (from April through September, bring mosquito repellent).

1 thought on “Womack Creek in bloom — see and smell the Pinxter Azaleas now and for the next 3 weeks!”