This is not what we expected two days ago.

I had forgotten my camera at home when we arrived at Womack Creek to do our November field report.  What a shame…the morning started out in thick fog, so thick that the water droplets hung on to the spider webs on the creek.  When the fog lifted the skies were clear and the colors of the creek literally shimmered fall.

We returned 3 days later with camera.  The photo above was what we saw:  to the left, Womack Creek, the Ochlockonee river is on the right, looking upstream.  One hour earlier than three days ago.   The truism, every paddle is a different, hit home.

Within the hour, the heavy clouds dissipated and the clear sky opened a palette of fall colors: 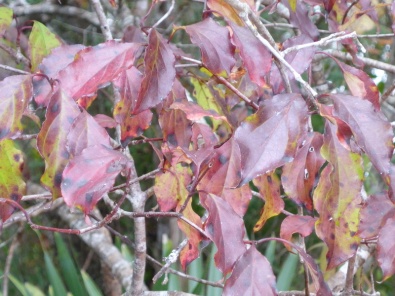 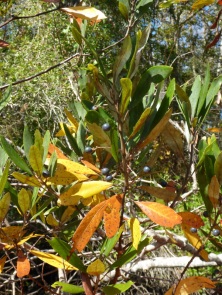 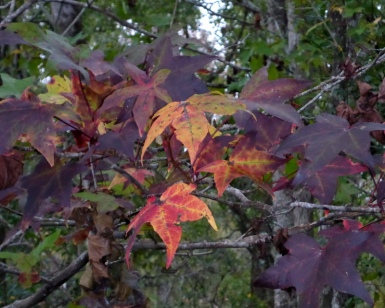 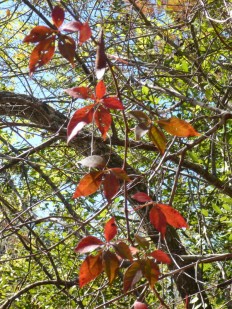 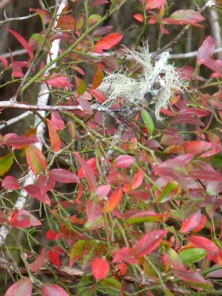 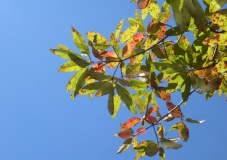 And flowers were still blooming on that creek.   Last month the lavender colored climbing asters out-shown the others.  Insects love these blossoms: butterflies, bees, other insects gathering the last nectar of the season.

This month, Simmond’s aster, smaller,  demure, and less attractive to the insects, dominated the creekside.

And a few holdouts — little gems which could easily elude your eyes. 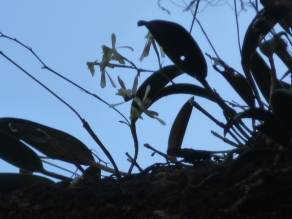 A bloom which is still to open, about a month late — silvering buds are still tight, holding on before releasing open their brush-like flowers.

If you suffer from hay fever, you don’t want to be near this shrub when it’s blooming.

And if it’s November, one is likely to see this pinxster azalea shrub which always blooms months ahead of the other pinxters on the creek. 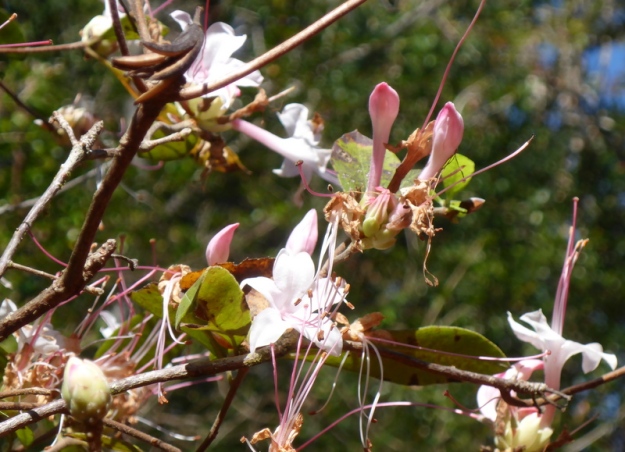 It lacks the fragrance of the spring blooming pinxters, but the shrub blooms so consistently in the late fall.  Finding it blooming is like seeing the first crocuses in spring in the North. 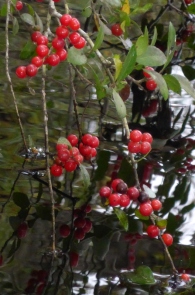 The tide was coming in when we set out upstream, but it soon turned. When it did, a great blue heron, finding exposed areas along the floor of the creek, flew in to feed. 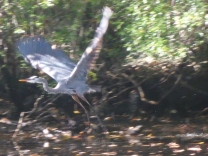 Not as many gators as two days ago, but this 6 footer loves its bank. 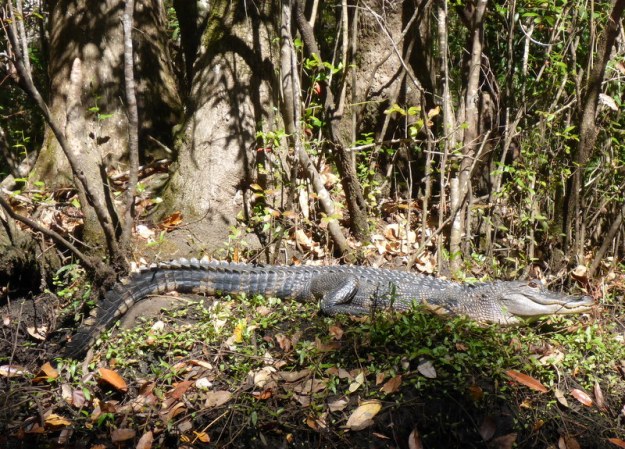 Lots of cooters, a few warblers, a vulture, woodpeckers and the migrating ducks are finding the little ponds within the forest to be nice stopping places.

There are lichens and mosses, and these have flowers — see if you can detect them. 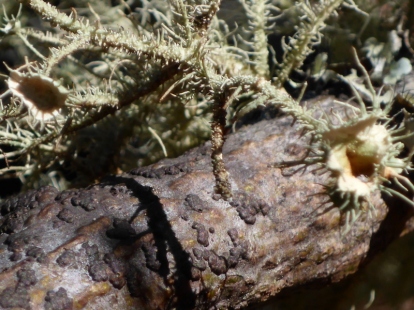 We stop for lunch at Nick’s Road primitive camp site — it’s a quiet (except during hunting season),  private place to camp. No water or toilet facilities at the camp — bring a foldable (military) spade and dig 200 feet from the water for toileting, away from the camp site.

The photo on the left is looking down the creek, on the right looking upstream.  The creek forks upstream, one fork goes for about 1/4 miles before the water gets too shallow; the other goes as much as a mile, depending on the tide levels and also branches again.  Great exploring areas — we surprised an otter in one of these branches once.   In the fall, don’t be alarmed at all the spiders on the branches above you — they might fall into your boat.  Just pick the fallen spider and put it back on a limb.  It needs to prepare for the next generation of its kind.

Fall is for landscapes — it’s hard not to feel enveloped in color. 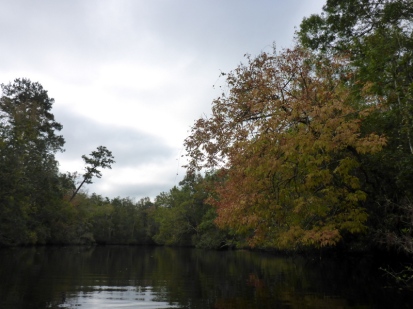 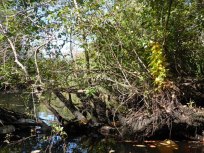 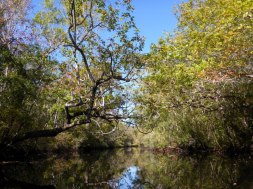 That photo on the lower left is not upside down — it’s how the trees look when you look up.

There  may not be many of them, but skippers and bumblebees and an occasional dragonfly, zebra long wing and sulphur butterflies can still be seen on the creek.

Keep an eye for snails — these are hatched native apple snail eggs.  We’ve never seen an apple snail on the creek, but we are looking. If the snails are there, the limpkins may not be far behind. 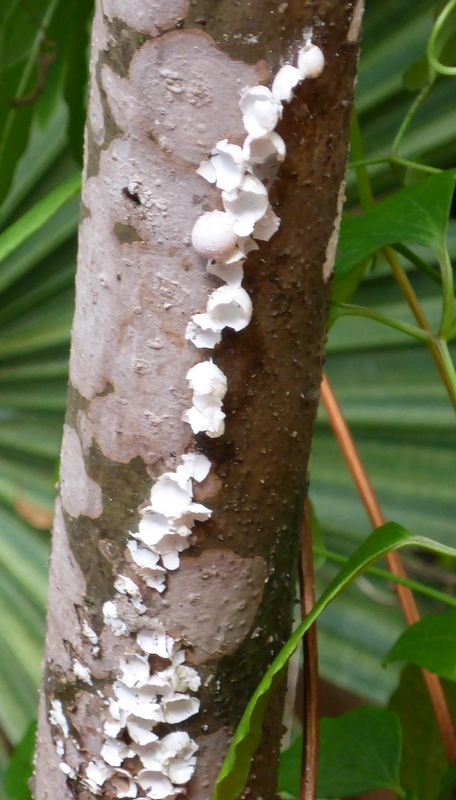 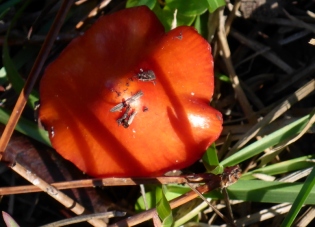 At the landing, not to be outdone by the colors on the creek, these buttons of orange shone under the kayak trailer.

Womack Creek, a western tributary of the Ochlockonee, in Tate’s Hell, has a world of native species all year round.   Paddle with a discerning eye and every paddle brings a surprise.

For plant and others ID’s on the creek see The Paddler’s Guide to the Flowering Plants of Womack Creek, http://www.womackcreek.wordpress.com.