It runs out of the Federal Mud Swamp Wilderness Area into Tate’s Hell State Forest.  The river is replenished by rain and seepage.  It’s the water source for the evergreens and deciduous trees which line its banks.

Rule of thumb on paddling that river is:  go before the deciduous trees start greening.  Deciduous trees gulp more water than evergreens and when fully leafed a paddler could be pulling his/her boat.  In the summer, before the rains, there are only deep pockets of water in the top 9 miles of the New before it hits campsite 17 in Tate’s Hell.  (In 2017 Tate’s Hell Forestry renumbered its campsites, so what used to be called campsite 7, is now 17. Reservations are now available through Reserve America.)

It’s been a few years since we’ve done the New, so when a forester asked if we wanted to organize a group, we jumped at the chance.   Put out the notice, limiting the paddle to 15, and within two weeks we had a waiting list.

It’s 21 miles of paddling, but the shuttle from the put-in to the final take-out takes about 1.5 hours. It is not safe, particularly on weekends, to leave cars at the put-in — it is a favorite party spot — beer cans and bottles littering the area.   The bridges across the New further downstream had been recently condemned for structural problems, so we anticipated an even longer shuttle. (By March 3-4, the bridge had been fixed and approved for traffic.)  Without knowing what the river conditions were (there had been a tornado through that area the year before), we assumed that the first 9 miles could take the whole day if we had to portage and/and detour past fallen trees and strainers.  We could be hacking open a trail if winter storms had resulted in downfalls.  It’s a wilderness area — there is no road access after campsite 1 in Tate’s Hell, just below the put-in on FR 22, east of Sumatra.  There is a steep drop off into the water from that site, which, normally would be a safer place to put-in and leave cars parked overnight.

As in other group ventures on that section of the New, we planned it for two days, just in case every challenge was thrown at us.  We would camp at campsite 17 (previously campsite 7) along the river.  There are other campsites along the river, but only a few are easily accessible for kayaks (sharp drops into the water at some, bluffs in others).   Campsite 17 has a lower section which has a sloping sand beach which allows for large numbers of boats to land.  If the river is high, there is a sloping flume, large enough for a canoe to paddle into to the level of the campsite.

March conditions in this area is unpredictable.  If it rains the few days before camping, the rising water levels could cover the higher campsite, as one tired group of paddler/campers found on one paddle.  Soundly sleeping in their tents, the water rose, waking the occupants of the lower tents.  Quickly alarming the group, they had to check that all boats were secured before moving all tents to higher sites on the road leading to the campsite.

Temperatures can get to sub-freezing (in the teens) in north Florida in March.  Another group of of camper/paddlers used up all their wood trying to keep warm.  Sleeping bags deemed suitable for 20 degree only keeps you warm at ambient temperatures above 35, if you’re layered.  Tents didn’t help, so they huddled together around the fire, sending out scrounging parties when the cold outlasted the supply.

These  tales, passed from paddler to paddler,  excite the adventurer spirit in all of us who paddle the New.

Two of us are cautious about taking a group where someone could get hurt, so we insisted on scouting the river the week before the paddle.

We camped at campsite 17 the night before.

In opening up the river, none of us want deep cuts.  We believe in keeping wilderness waterways wild, but we did not want dangerous strainers in fast moving waters to cause harm to an unprepared paddler, or someone capsizing in a bend because branches or bushes blocked a narrow opening.  We anticipated a full day’s work.

This is the campsite the night before and the river, looking downstream.  The deciduous trees were already greening.

The next day, the river was running fast, but the water level seemed good.  We had several limbos, a few pull overs (getting out and pulling boats over large fallen trees across the river), lots of scoot-overs (scooting the boat over barriers in the river with only a few inches of water above them, momentum helps).  There was one sharp bend with a bushy shrub blocking safe downriver passage (to avoid hitting the bush, a paddler could over steer with body away from the bank and capsize) so we stopped for about 20 minutes trying to cut only what needed to be cut to make a safer opening. 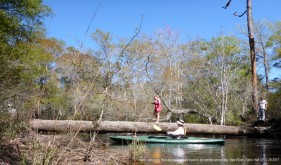 Scouting and clearing didn’t take that long.  Now, it remained for what the week would bring.  We were hoping that the river levels would not drop too much.