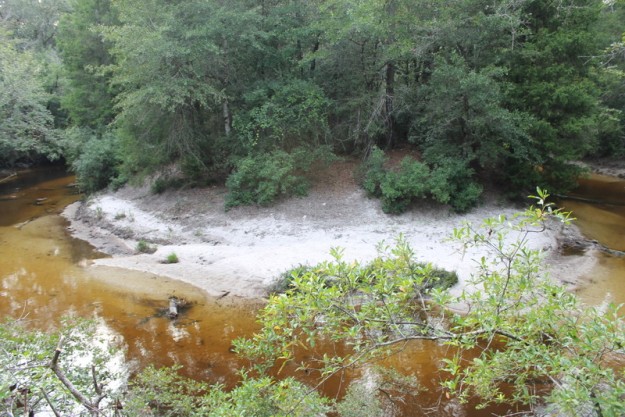 As a local who appreciates the outdoors, natural areas such as Blackwater River State Forest are a welcome diversion from modern life.  A peaceful hike along a trail or a laid back float trip down one of the rivers that run through it settles the mind into a quiet state of reflection.  As the human experience slows, the mind opens to notice more:  a green lynx spider with a bee in its web, a white-tailed deer track, an endangered pitcher plant.

Even with a natural eye, on a field trip to Blackwater River State Forest with the Florida Master Naturalist program, I was able to come to appreciate even more about what we have right here in the Florida panhandle.  As we walked through the thigh-high wiregrass surrounded by pine trees and sparkleberry bushes, our group came to stop under a tall pine speciman and learned that it was a long  leaf pine, a species of pine that inhabits less than 6% of its original range due to exploitation by the logging industry in the early 1900’s and from attacks by the southern pine beetle.  It is the key tree species in a complex of fire dependent ecosystems in the southeastern United States and plays a vital role in the survival of numerous species of wildlife, such as the endangered red cockaded woodpecker. 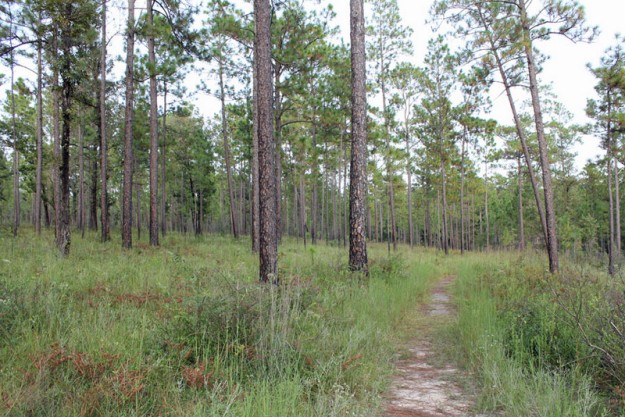 The red cockaded woodpecker only makes its cavity nest in old-growth long leaf pines that are at least 80-100 years old.  Our guide, who works extensively with the red cockaded woodpecker, set up a long pole with a video camera on the end and guided it up the tree to a small, nearly imperceptible hole.   Our group crowded around to get a glimpse of the woodpeckers, but instead got to see a southern flying squirrel who had taken up residence in the cavity, proving once again that a seemingly simple thing like a tree can help many things.

We moved on from the tree and carefully explored a small pitcher plant bog at the bottom of the slope where I was able to spot a small collection of white-top and parrot pitcher plants, as well as several small sundews.  The pitcher plant population in the United States is less than 3% of its original size due to habitat loss, a fact that wasn’t lost on me as I watched an impossibly tiny frog hop beneath a blade of grass in search of food.  The more we looked, the more interesting things we found:  wildflowers, dragon flies, archaeological remnants from the turpentine era.

We loaded back into the vehicles and headed to an ephemeral pond which is an area that has both wet and dry periods throughout the year and is important for breeding amphibians.  Although dry at the time of our visit, we were once again treated to the sight of unique plants and flowers that grow only in these temporary wetlands.  Almost as temporary as our afternoon outing that was winding down.

Although not my first visit to Blackwater River State Forest, it was one that provided greater insights about the importance of protecting our natural areas, both for ourselves and our environment.  Now, whenever I return, I will walk the trails and float the rivers with hopes of seeing even more hidden treasures.