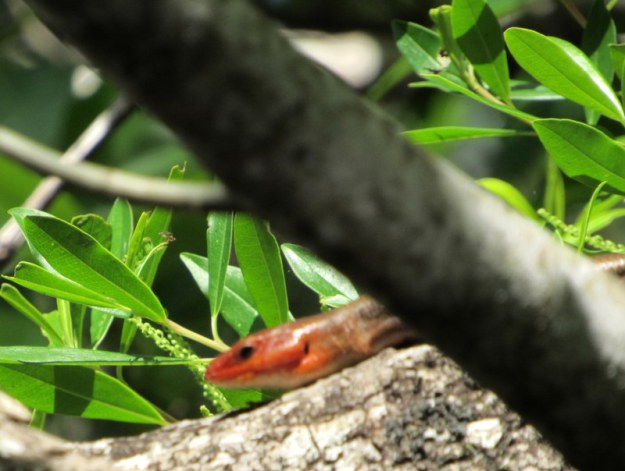 It was a perfect day for snakes and while scanning the shrubs and overhanging branches, this redheaded creature popped into view, above me on an oak branch.  Most snakes we’ve seen on Womack creek are at kayak eye level or about a foot above that down to the water, so not just the coloration of the head, but its location suggested that it was not a snake.

Unlike the water snakes on the river which allow one to get really close without moving, this creature quickly escaped down the oak tree and into the leafy bank below.

This is a broadhead skink (Plestiodon laticeps), the largest skink in southeastern US, which can get to 13 inches long.  It is a common semi-arboreal skink  from southeastern Pennsylvania, central Indiana and eastern Kansas to to eastern Texas, the Gulf coast to Central Florida.

This is a male adult skink, more likely.  Juvenile and to some extent female skinks have five to seven stripes along its upper body, similar to another skink species called five-lined skink (Plestiodon fasciatus).  Juveniles have a bright blue tail. Male heads become larger and turn orange as they approach mating season, usually late spring (May 4, in this photograph).

Males smell through their tongue, the better to smell the pheromones emitted by females who are ready to mate.  Females seem to prefer larger males with brighter colored heads.  Once bred, a male will stay with a female for about a week, challenging other males from approaching her during this time.  The male is not monogamous.

The females lay from 8-13 eggs in a nest in decaying trees or leaf debris.  These hatch from 3-8 weeks from laying, the female leaving the nest only to feed.

Newly hatched skinks are on their own within a few days of hatching and are sexually mature when they reach over 3 inches long.

They feed on insects, spiders, mollusks, rodents and smaller reptiles, including juvenile skinks. They, in turn, are food for carnivorous birds, larger reptiles and cats.  Skinks have break-away tails which continue to wriggle, thus distracting its predator while making its escape.