This cotton mouth (water moccasin) was crossing from one ditch to the other on Gully Branch Road.

Having seen a lot of water snakes on Womack Creek, and not seeing the indicator of a venomous snake — its triangular shaped head — I assumed it was a brown water snake. However, just in case I was wrong, I gave it enough breadt. It stayed put while I walked around it, taking snap shots.

Later, I found out it was a cotton mouth.

This is what I should have known: dark strips by each nostril and pale snout. The triangular head on this one was not noticeably triangular, but the distinct neck should have been another warning. Nonvenomous water snakes do not have necks. In coloration, dark brown, black to olive and with brown or yellow banding, it looks like come water snakes. If I got close enough, I should have noticed that its pupils are vertical, like cat pupils, not round in most nonvenomous snakes.

Fortunately, they are not known to be aggressive. However, had it been warning me, it would have coiled and exposed the inner lining of its mouth.

The bite is highly venomous and one should seek treatment immediately. Anti venom is available for this species.

As a constant paddler, I should have known how to distinguish a cotton mouth from nonvenomous snakes. 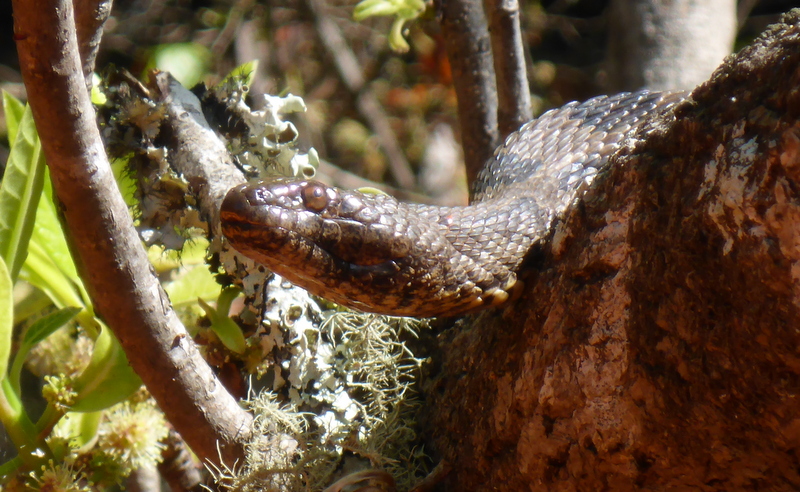 With temperatures starting at 72F and inching up to 82F at end of the trip, we knew we’d spy at least one snake.  They are usually seen sunning under leaf-canopied stems of shrub branches extending over the water.  Unlike cooters, skinks and gators, they tend to remain in place if one approaches them without undue motion or vibration.

We saw only brown water snakes, but we did see three, one barely discernible.

We are always looking for snakes on the shrubs overhanging the river.  Camp hosts have told us of water mocassins near the landing, but we have never seen them.

On warm days, we look for these snakes, on branches, out for a good day in the sun.  Usually seen after late April, here it was in March — a beautiful banded water snake.