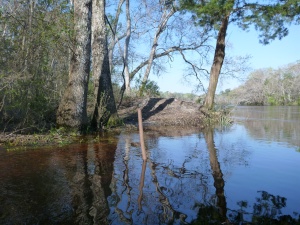 Normally, the river ends before the iron post seen with water halfway up at the put-in at Womack Creek Campground landing.

The river was running high and fast on Friday, March 21 (full moon was 16th).  Rather than do the up and back of 8 miles from the Womack Creek Campground landing, we suggest some paddlers may wish to do  a 4  mile paddle from Nick’s Road Primitive Camp Site downriver to the Womack Creek Campsite (shuttle necessary).   To get to Nick’s Road primitive camp site see directions at bottom of this post. 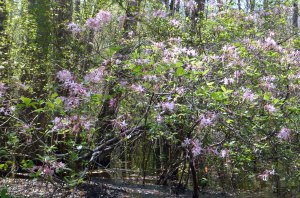 This bush was upstream from Nick’s Road landing. The river was high enough on 3/21/14 that we were able to paddle 2 miles upstream from that landing.

Walter’s virburnum is right now in its height of blooming in the lower 2/3’s of the river. 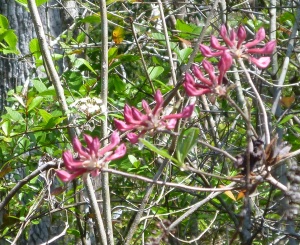 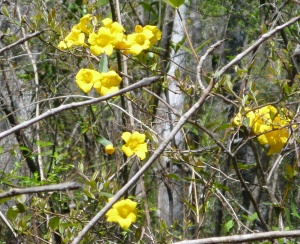 But whites dominate, with parsley haw trees in full bloom. 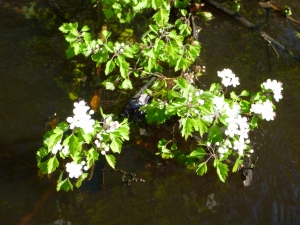 White blackberry flowers will be blooming within a week. 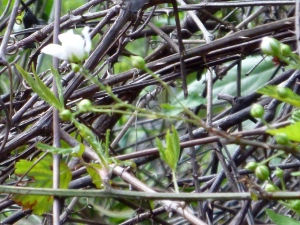 Oaks are blooming, last year’s leaves finally cast into the dark waters below. 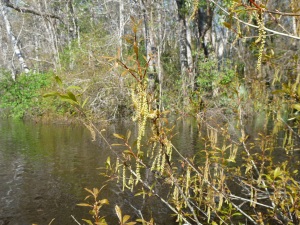 Within two weeks swamp dogwood flowers, also white clusters, will be in bloom. 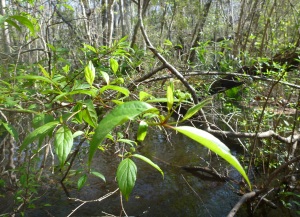 These are more scenes of high water on Womack Creek. 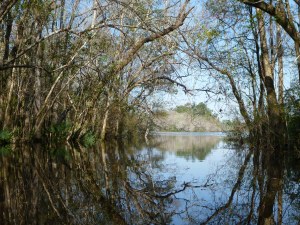 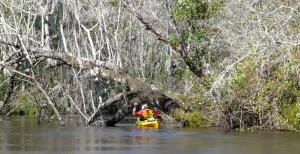 Usually there is at least 2 feet of head room under this arch. It forms a beautiful bower when the azaleas just upstream and the blackberries just downstream are in bloom at the same time. 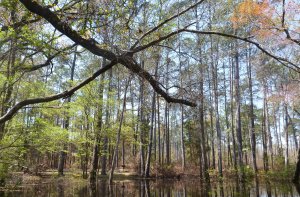 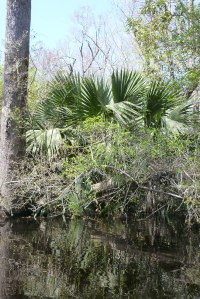 Hitchhikers — while going under brush and branches — they won’t bite, just brush them or pick them off. 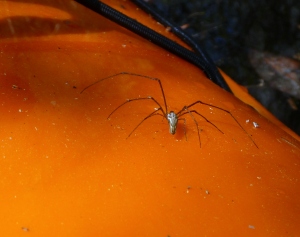 And a reminder of last year’s bounty caught by this year’s net. 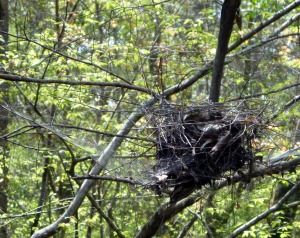 And promise of summer’s bounty. 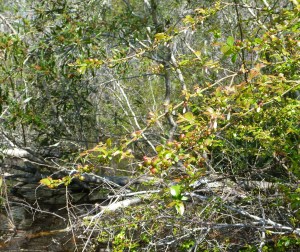 Blueberries, ready for picking and eating in late May.

Right now….enjoy the creek as it prepares for the full spring wakening. 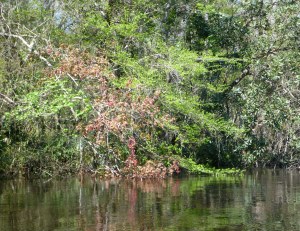 At Womack Creek Campground this week was a father with his 2 sons and 3 other young men from Tallahassee.  Their 3 guests left at mid-week, but the father & sons enjoyed the whole week of spring break, camping and fishing from their boats.   He takes his sons camping, at their request, to various places in north Florida.

Midweek not more than 50 paddlers from Paddle Florida arrived for a night’s stay at the campground enroute to Ocklockonee State Park and Brill Point.  They were on day 4 of their paddle from the Dam to the Gulf on the Ocklockonee.

On Friday night, a new student taking the Master Naturalist course camped there. After dinner we invited him to join us at our fire and the time went by quickly.   The next morning, we got up early to get to class at the Apalachicola National Estuarian Reserve in  Eastpoint by 8:30 am where we are learning about coastal ecosystems.

A family was also camping at the Loop Landing site, a very nice site about 2 miles from the Ocklockonee River on Crooked River.

Oscar Sanders was a welcoming sight to campers — he was able to give advice and pointers and local history — his family being one of the oldest families in the area.   Jeff Sanders Road is named after his father.

From Hwy 98:  To to Carrabelle, FL.  Take CR 67 north which is also called “Tallahassee Street” in downtown Carrabelle.  There may not be a sign at the hway 98/67 intersection so look for the street name.  You will see a CR 67 sign a couple of blocks north of this intersection.  Go north on CR 67 for approximately 6 miles and cross the Crooked River bridge (the first bridge).  Go approximately one more mile and turn right on Jeff Sanders Road.  The road angles a bit NE off CR 67.  There is no road to the left.  Stay on Jeff Sanders Road for about 5 miles.  You will cross Rock Landing Road and then come to Nick’s Road on the left.  Nick’s Road is a one lane road with the sign on the corner that says Nick’s Campsite at a fork.  Take the road and it will lead you to the campsite on upper Womack creek.

From East or west on SR 20: Go to Hosford, FL on SR 20.  Turn South in Hosford on SR 65.  Go 3 miles to Telogia.  There is a road sign to Carabeele in Telogia.  Turn left at the road sign to Carabelle and on CR 67 (there may not be a CR 57 sign at this interesection, but you will see a sign a few blocks down the road.)  Go approximately 23 miles south on CR 67 to Rock Landing Road.  This road is about 3 miles after you see the first sign that you as in Tate’s Hell State Forest.  Turn left on Rock Landing Road and drive 4 about 4 miles to the intersection of Jeff Sanders Road.  Turn left on Jeff Sanders Road and proceed to Nick’s Road on the left.  Nick’s road is a one lane road.  At the fork, take the road which says Nick’s Campsite to campsite on Womack creek.

Go very slowly over large gravel over low spots on Nick’s road, to prevent rocks from damaging the underside of your vehicle.

If someone is camping there, please respect their desire for a wilderness camping experience by loading your boats and leaving your shuttle car out of their space.  Do not obscure their view of the river with your car(s).  It is one of the nicest camp spots in Tate’s Hell State Forest.