To avoid the summer thunderstorms, we put-in early.  At 8:40 we were already on the river and the first blossoms we saw on river right was stand of cheerful shortleaf sneezeweed.   This and the poisonous water hemlock were new blooms on the creek.

The temperature was in the mid-80’s, the water was calm, the sky blue.   There was a slight breeze which was cooling and did not hamper paddling.  The tide seemed to be at equilibrium.

For those planning to paddle this creek, the following flowers are at the end of their blooms:  swamp titi, arrow wood, swamp rose, pickerel weed, swamp (false) dragonhead, button bush, narrowleaf primrose.  However, these plants are still in bloom:  sweet bay, scenting the air around them; coastal rose gentian (look on the forest floor); clematis crispa, nestled in their vines and spatterdock in the water; green fly orchids will be blooming for another month — you will have to look on the trees for them. 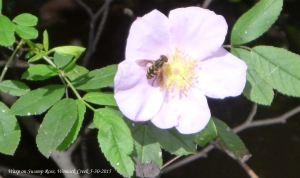 We were delighted to find pairs of cardinals and, even more surprising, pairs of protothonary warblers flitting in the shrubbery.   They were the most common birds, but there was one little kingfisher and a buzzard overhead.   In the woods one could hear a hawk.

There were not as many cooters as one would normally see and these were juveniles.  One 4 foot alligator — another juvenile.

We were also happy to see many apple snail eggs throughout.  This is the preferred food for limpkins and their presence in this creek may mean that we may be finding pairs of limpkins there.  Except for one sighting last year, we have not seen apple snail eggs in that creek since 2011.

This was perfect temperature for water snakes, but as hard as we looked, we failed to detect any.  There are there, however — a favorite location is in the blackberry bushes which are now loaded with fruit.

New Ogeche tupelo leaves are sprouting after the infestation by tent caterpillars, but we noticed very few drupes (fruits).

Except for a Gulf Fritillary, the butterflies have departed to other areas with more nectar and pollen.  A few wasps, hardly any honeybees, a few bumblebees and other smaller insects.   But the dragonflies are throughout the creek, dipping into the water or hitching a ride on the kayaks. 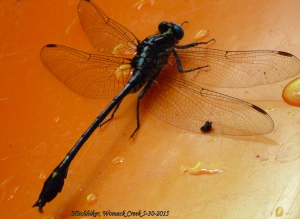 Deer (yellow) flies, however, were persistent and aggravating, particularly in the upper 1/3 of the creek.

We explored one branch — these are smaller creeks and provide lots of shade and a cooler temperature, but at the risk of deer flies.

There is a smaller tree down in the upper third of the creek which we could have cut through if we hadn’t forgotten the saw.  And there is a much larger tree which would require a chainsaw to cut through shortly after that, but we were able to paddle around a small opening.

When we took out, just before 1pm, the air around the water was in the 80’s, but the land was closer to 90.   Southerly breezes were cooling us at about 8-10 mph, and the tide was coming in.   In the summer — the water is where one wants to be.